This was Cisco's last hunt, capping his best season with cat squirrels. Between March the 10th and publishing this today, I trimmed his very sharp, but slightly overgrown talons; no going back. 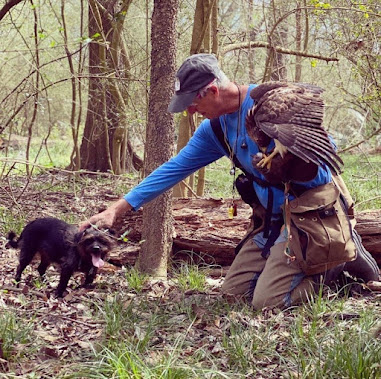 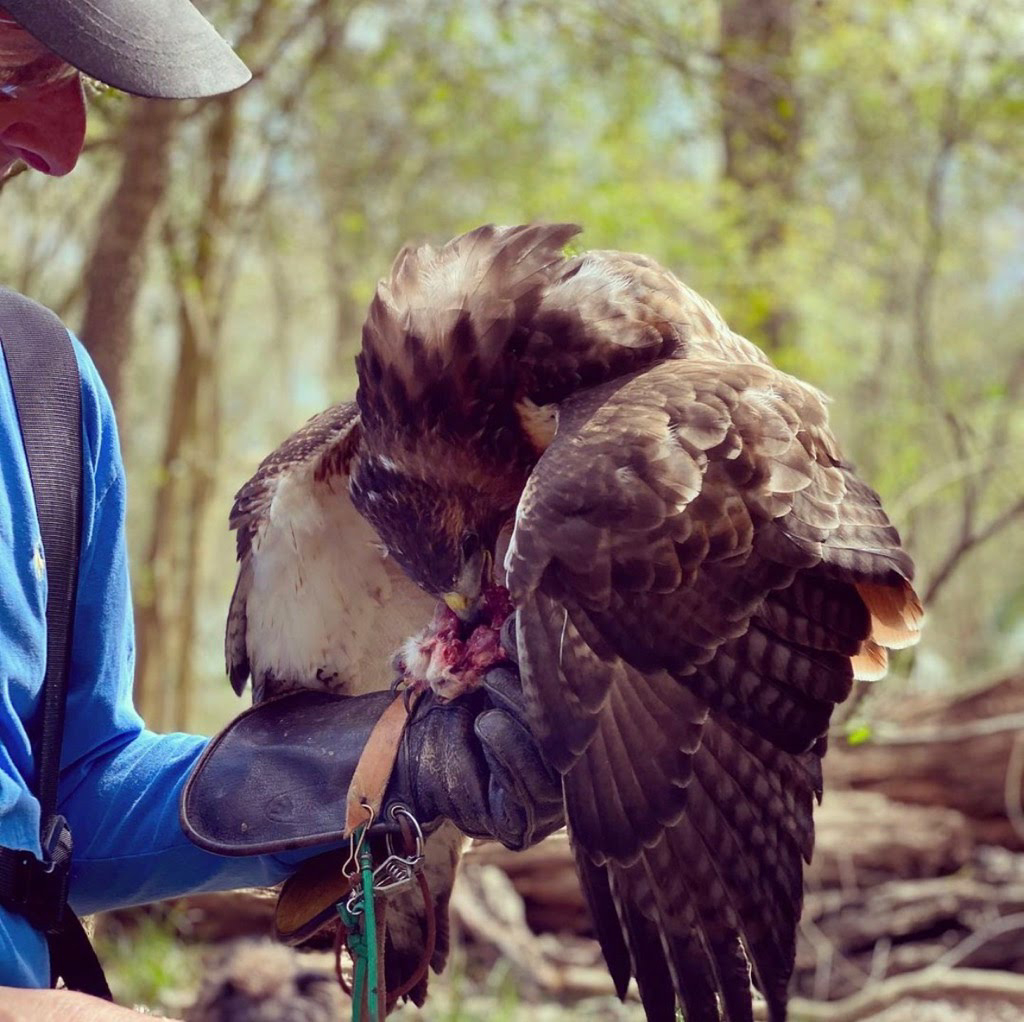 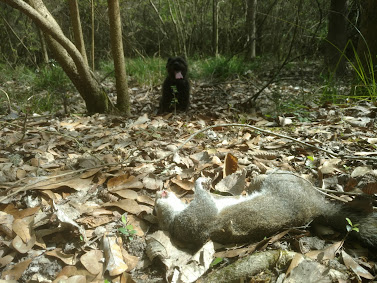 Remains of The Day

Since the late 1990's Matt has flown at least three male Harris's Hawks, all Coulson birds. I have been hawking with Matt on a number of occasions since we became friends in 2005. We have hawked together with two of my Harris's Hawks, my Red-tail Cisco, and my Red-shouldered Hawk. Matt has flown Charlie, Smash, and now Ernie. Ernie, like Dart, is a 2007 hatch Coulson male but has different parents. Matt finished this season with Ernie here in Houston on one of my fields. We went out with Dart, Farrah, and Ernie, the fields were not great, but we managed to catch a few.

Back to Kestrels. Matt came in to Houston on Friday 2/7 and started talking about trapping Kestrels. Also we ate some BBQ and drank a little beer. Matt's plan was to meet up Sunday with a buddy in Lafayette on the way home and take his first Kestrel in decades. His late trapped female called CC has been productive in the field, if a bit skittish overall. Kudos, Matt.

From Matt - 3/29/2020
KESTREL CODA: I drove past our training field last night and saw no sign of CC. The local kestrel was there, a dark bird that often came in during our training fights to harass us interlopers.  I wondered if maybe CC folded under pressure and left the area while I was at work.

I went to sleep with something akin to the feeling you have about a lost hawk, even though the circumstances are obviously different and more favorable after a planned release. It still helps to have proof of a positive outcome.

This morning I was back in the field with binoculars, the lure and half a thawed starling. I saw her immediately when I pulled up, sitting on a lamp post. No question about it: Even after a few hunts, a falconer’s search image is strong for a particular bird; where and how she sits, the color pattern at a distance. A familiar shape, recognized more in the back of the brain than in the eye.

I turned the car around to park it, fumbling with my gear before getting out, and she was gone.

The other kestrel, the dark one, sat fluffed out on a low perch in the middle of a mowed field a hundred yards behind me. She looked to have been sitting there a while. Still, my certainty of CC’s presence diminished slightly. Seeing both birds at once would be better.

I glassed the field, every lamp post, fence post, power line, survey stake, stop sign and tree top.  I saw two red tailed hawks, a bald eagle, and then near where CC seemed to disappear, a juvenile Cooper’s hawk, slicked down and in hunting mode, half-hidden in a pecan tree.

The Coop tensed, bobbed his head and leaned forward, then sprang from the tree and straight for something near the road. Whatever it was must have seen the attack in progress and evaded, as the Cooper’s hawk swung back toward its original tree.

And behind it, clear in my binoculars, a pale female kestrel came pumping in, pitched up and stooped once at the larger hawk before circling back to her own tree top perch.

It was CC - again without a doubt in the brain’s basement - and she seemed very much at home in her little corner of the farm adjacent to our training field. She bobbed once at the lure when I swung it and bolted toward me, I felt, in response; but she turned in a tight circle and lit again in her tree.

This kestrel who wouldn’t land on the lure when 2 grams over hunting weight certainly won’t when 20 grams over and beneath three hawks and an eagle.  I was satisfied with her answer. I watched her for about an hour from my car and drank my coffee and took a few pictures for this post.

I checked for the other bird and she was there too, unperturbed by CC’s occupation of the field’s far corner. 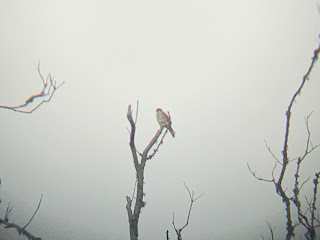 Another good day with Farrah.

Late today I took Farrah out to a new/old field west of Katy. She did so well, I put her up so she wouldn't get full and fly off. She's getting her meds with food. I'll take her back here Monday. 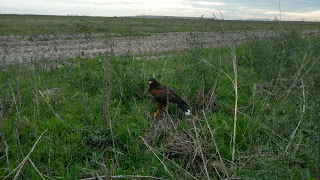 Right after a catch, Farrah yesterday grabbed a Short-eared Owl that I rescued. I first grabbed Farrah's head, then hooded her, then I secured her to my t-pole while I got the owl settled in my game bag. This was a tiny little rascal that I took to Wildlife Center. The owl lost a talon sheath and got grabbed. Farrah had a small patch of feathers on leg pulled and got grabbed. My veterinarian, Mark Peckham, recommended to continue the Spectra antibiotic for another week.

Today, I'm heading out with Cisco and Arnold for a last hunt. 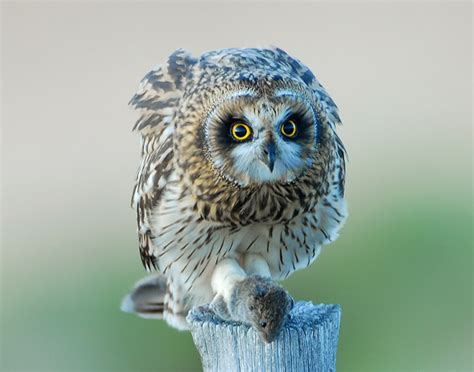 Wrapping up the season

A copied text because I'm lazy:
This picture tells it all. Really tough today - muggy, warm - both hawk and dog panting. Few squirrels seen and Cisco kept faking me out. Heavy rain for a couple of minutes and we headed back. Cisco in major tidbit mode, a euphemism for aerial panhandling. I cut off the path to the right and Cisco followed. Shortly Cisco headed back across the path and clobbered an inaccessible drey. Out popped a squirrel followed by intense pursuit by hawk and dog in cover that should have beaten them. Six in a row for this team and nine in last ten trips. This is the most squirrels Cisco and Arnold have caught in a season. Then add Farrah's single squirrel before her permanent squirrel retirement. Friday I will shut down for the season. Last hunt. Farrah's done with her meds, so tomorrow out with a non-squirrel hunt. 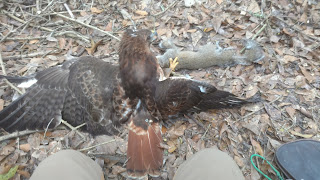 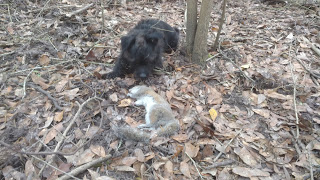 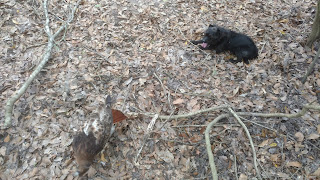